Let's start something great together

19.12.2018Blog PostCulture
A story about where it all started from and what has happened along the way.

Bitfactor’s fifth anniversary is at hand, and it has made us think about the company’s past and the years ahead. A lot has happened since 2013, when three people got the idea of starting their own company.

As the company has grown over the years, I’m occasionally asked about Bitfactor’s history by both Bitfactor employees and customers, for example about our early journey and the origin of the company’s name. Our development from humble beginnings to a work community of over 150 people seems to have attracted interest, so I thought I’d explain how it all started.

The idea of Bitfactor began to germinate more than a year before the company was founded. The software industry was going through a difficult time. During a period of unemployment, together with Kimmo Heikkilä and Janne Tuomikoski we came up with various business ideas – some more serious, others less so, from the representation of a Danish kitchen brand to a boutique selling branded clothing. In retrospect, perhaps those plans weren’t thought through all the way. They developed out of a desperate situation where no work that was remotely related to our own area of expertise could be found.

A decisive impetus for starting our own business came when I asked my former manager about an open position of Technology Manager. He promised to recommend me, but he also asked me a direct question: Is this what you really want to do? He was looking for a partner company for a long-term project. The idea of starting a business began to evolve from this discussion.

Boldly against the grain

In those years, software companies in Oulu were in difficulty. They dismissing or temporarily laying off large numbers of workers. Setting up a new software company in this situation seemed like a crazy idea. On the other hand, there were many experienced workers available, and we wanted to get back to work in the sector. Despite the risks, we came to the conclusion that this is the field where our talents lie and that this is what we want to do, in our own way. Above all, we wanted to have some of the best professionals in the industry, ready to really put their hearts into our work.

We decided to present our business idea to a few potential employees. They seemed interested, so we agreed with my former manager that if a deal could be made we would start the business and these people would come to work for them. One at a time, the pieces fell into place, and Espotel became Bitfactor’s first customer. For more than a year and a half, the Espotel project developed into the backbone of our growth.

Our team in the early days

Our timing turned out to be excellent. We were able to recruit experienced people because almost no other company in the industry was hiring, and we were beginning to earn a good reputation. We also received more and more contacts from customers. We were able to grow by doing the opposite of what everyone else was doing: by going forward at full speed during the worst period of the recession.

We quickly developed a technology team for Bitfactor with the expertise to handle any challenge. However, we wanted to grow in a more diverse way. With this in mind, we expanded the team with professionals in digital design, analytics and business development.

What to call ourselves?

When we made our first tender, the company didn’t have a name yet. Initially, we operated under the working name of “Bittitehdas” (meaning “bit factory”), which Kimmo had come up with, but soon it was time to come up with an official name. One November day, we were brainstorming some ideas in the middle of a long conference call. Most of the good ideas for a name proved to be out of the question on account of the domain already being reserved, or because a company with a similar name already existed. In the end, the name Bitfactor was suggested. It must be said at this point that there was an alternative name in the founding papers: if Bitfactor wasn’t good enough for some reason, we would now be operating under the name of Velocity.

The spelling of the name we finally chose has varied several times throughout our history. In the original registration papers, the name was written in CamelCase lettering: BitFactor, with a capital F. This was a decision taken by a greying CEO who was longing for the old days as a coder and didn’t give an awful lot of thought to the decision. As “BitFactor” was the name entered in the official founding documents, that spelling can still be found in some places.

Our dynamic sales and marketing director Kimmo, on the other hand, wrote the name “BITTITEHDAS” in all-capital letters. These two variations existed for the first year or so until we settled on Bitfactor, without the capital F. Maybe one day we’ll find ourselves spelling our name as bITfACTOR, or something else equally original.

From office to office

Throughout its history so far, Bitfactor has had five different offices in Oulu. Our very first was a room in my home. When I was unemployed, I used to spend time seeking inspiration in the Yritystakomo startup incubator in Oulu. We were offered half of a meeting room without a window – which of course we accepted. A few months spent in half a room was enough, however, and our first actual lease was taken out in a startup corridor at Elektroniikkatie 3 in Oulu.

This third location had two rooms, eight workstations and a set of tableware bought from the Ikea store in Haaparanta. The easiest entrance to the office was through the fire escape, which probably left a lasting mark on a person with a fear of high places. This office also had our first logo wall, which under the direction of Janne was painted with the company logo using tape.

Brand wall 2.0 would adorn our fourth office, in the attic of SmartHouse on Elektroniikkatie. For this purpose, Janne and our Chief Technology Officer Mikko Levonmaa picked up a trailer full of five-meter boards and painted them red. The toughest part of the job was carrying such long boards up to the fifth floor. To this day, someone with a sharp eye could find red streaks left in the SmartHouse stairwell. We wanted the Bitfactor logo to go with the boarded wall, and we ordered it in large individual letters from a local carpenter. To save money, we ordered the logo unpainted. Big mistake. The painting and polishing proved to be a shockingly big job, but the logo turned out great in the end. Only one letter was in a slightly different shade.

Eventually, there were more than ten people working in the SmartHouse office, and less than a year after the move, things began to be cramped. In May 2016, we moved to our present location at the other end of the road.

We had a strong desire to grow and evolve, so the idea of setting up our own office in Helsinki had been taking root for some time. After finding a suitable leader and office space, sales and recruitment in Helsinki got off to a good start. Now more than 40 people work in our Helsinki office, and the number is growing all the time. Bitfactor’s culture and atmosphere are also conveyed nicely with their own little nuances in the Helsinki team.

Bitfactor now employs over 150 professionals in various fields. We have done great projects with companies such as VR, Volvo and Savonlinja, and have received help to grow through an investment by Viria. I hope the years to come will be at least as eventful and exciting as our story so far. 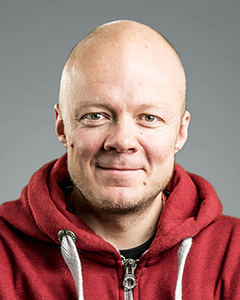